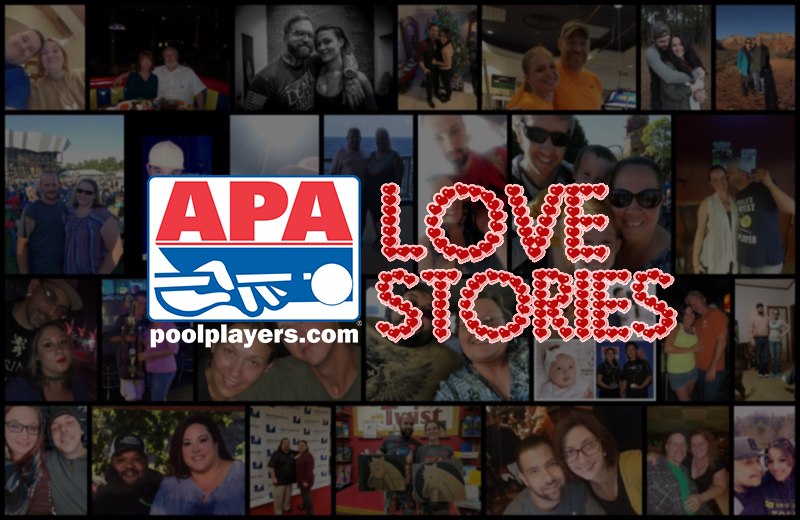 Have Fun. Meet People. Play Pool. That’s what APA is all about! We constantly hear stories of APA members meeting and falling in love. Here are just a few of those amazing stories! If you’d like to read more of them, click here to check them out on our Facebook page! Kyle & Natalie Guo – Kyle and Natalie met in the summer of 2014. She was an APA league representative. He fell in love with her instantly. They got married in April 2017 and later that year finished as Runners-Up in the 8-Ball Doubles Championship during the World Pool Championships. In October 2018 they welcome a daughter, Abigail, to the world (who I’m sure will be a poolplayer too!). Antonio & Mary Slaydon – They first met while shooting APA League in October 2011. Mary was recruited to join Antonio’s team when they needed a lower skilled player. She was scared at first, but her team told her to just have fun. They became friends and she started to tag along with him to more APA tournaments. In the next year, she went from playing on one of Antonio’s teams to three. She was hooked into pool and soon they became hooked on each other. They got engaged on League night and have now been married for over 4 years. Suzanne Talton & Morgan Hughey – Suzanne and Morgan met on Suzanne’s first APA League night. Morgan’s Team Captain posted on Facebook that he needed players so she decided to give it a shot. As soon as she saw Morgan, she knew they were going to be together some day. After four years of dating they are now living together and loving every minute! She’s even now the Team Captain. In August 2018 they played at the World Pool Championships in Vegas! “I’ll always be grateful to the APA for helping me meet the man of my dreams!” Suzanne said. Charlie Hair & Jamie Allbritton – Charlie and Jamie met 6 years ago when a friend asked Charlie to join APA. She instantly fell in love with the game. She was in a troubled marriage at the time and found solace in her APA pool family and friends. Jamie noticed her during League night and asked a mutual friend to set him up with her. She rejected him at first because of her situation, but he wouldn’t take no for an answer. They became friends, Charlie got divorced, and a year later, they began dating. In 2018, their team won a spot to play in the World Pool Championships where Jamie proposed in front of teammates and friends on Fremont Street. “Aside from my love for this game, APA introduced me to the love of my life!” Charlie said. Karloz Chavez & Kaylen Nicole – Karloz and Kaylen met at one of the APA Singles Regional tournaments. She was competing in the skill level 3 bracket in 8-Ball, playing Karloz’s friend. Karloz thought she was super cute and asked her to be on his team. After that, they started talking and have been together ever since. They traveled to the U.S. Amateur Championship together in 2018. Karloz has competed in that tournament four times, but he said this time was the best. “I love this girl a ton! Thanks APA for putting us in each other’s paths!” Karloz said. Todd & Whitney Speakman – Todd went to the Bakersfield APA city tournament just to visit with friends and watch the action. According to Todd, there was a beautiful woman in the bar playing a match who he had never seen before. He walked to the table and said, “Hi, how are you?” to which she replied, “I’m *#@%ed on the 3-ball.”  He said, “Yes, you are.” and proceeded to watch the shot, which she impressively made. They were around each other the rest of the tournament and their teams ironically played each other the Monday after. After Facebook stalking her, Todd asked her out to sushi and they’ve been together ever since. “We now have a beautiful 3 year old daughter and 6 month old son. Thanks to our League Operator, Michelle Henry, for providing the league that led us to meeting,” Todd said.