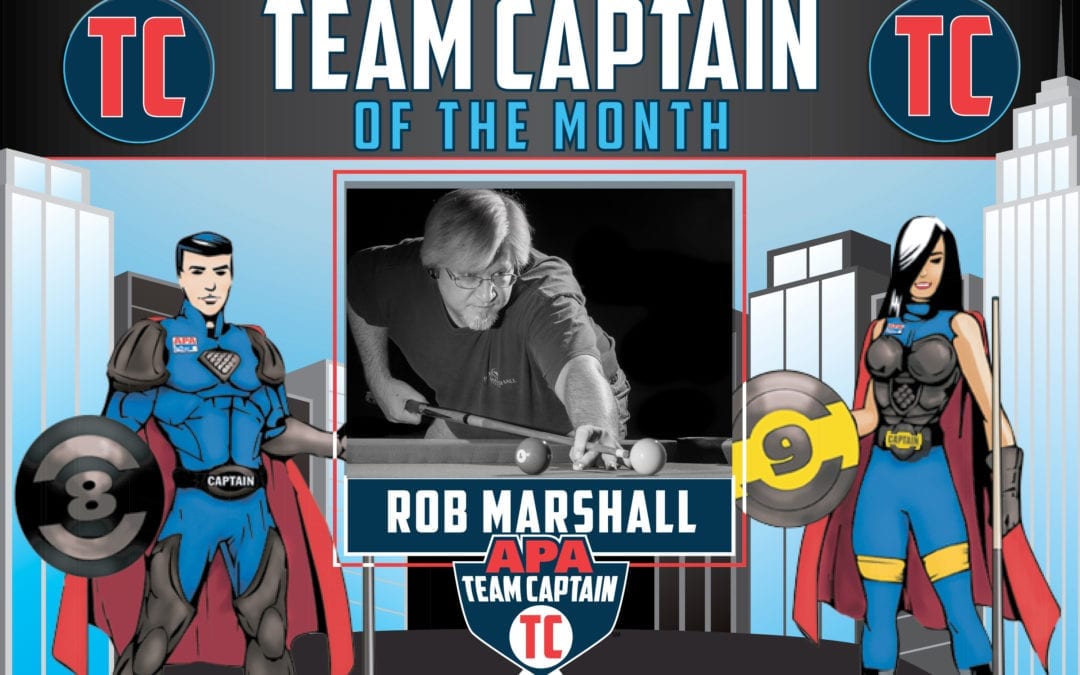 Rob Marshall of Lynchburg, Va., has been an APA Team Captain for over 25 years! Rob is such a special Team Captain that multiple teammates wrote in to nominate him. A few words used by his teammates to describe him were patient, supportive, knowledgeable and awesome.

“Rob has been my Team Captain since I began playing in the APA nearly 5 years ago,” teammate Meaghan Reilly said. “His vast knowledge of billiards and exceptional teaching methods have helped me become a stronger, more skilled player.”

Rob’s personable and supportive to each and every member of his team. He learns their strengths and weaknesses to help better coach them at the table when needed. When he gives time-outs, he understands how the players shoot, talks them through it and helps explain things to help improve their game. Rob led his team to the 9-Ball World Championship in 2017! His team competed in World Qualifiers many times, but this was their first time making it to Vegas.

“Rob is patient with new players and will host practice sessions and stay after matches for anyone wanting help,” teammate Gayle Lloyd said. “Rob is an outstanding individual!”

He plays in the Heart of Virginia APA operated by Susan Kinsinger/Bruce Northrop.  Currently, Rob is a skill level 7 in 8-Ball and a skill level 8 in 9-Ball. Susan says he’s a great player, Division Representative and Team Captain!

“We totally concur with his current team members glowing remarks of Rob, as we have seen these players grow in their skill, thanks in a great part to Rob’s patience and understanding of all players no matter the skill level,” Susan said.

When Rob is not playing APA, you can find him teaching photography or taking great pictures for RobertEarlMarshall.com.   Susan and Bruce personally have several of his framed prints. In addition, prints of APA players hang prominently in several of Host Locations from the past years!

“I think every member on my team would agree that we couldn’t ask for a better, more respectable Captain to have by our side and table each week,” Meaghan said.